The joy at the end of Advent is immeasurable. Jesus comes to bring light into the darkness. Jesus is the fulfillment of all that waiting. He brings what we lack. He is the ultimate end of the anticipation.

Darkness is often overwhelming. Waiting is difficult. Lacking leads to impatience and frustration. Anticipation can often lend to helplessness.

When I see things in my world that are less than perfect, I often do not know how to respond. And let’s be honest: political rhetoric combined with social media click bait only makes things worse.

I want so much to be kind and loving; yet that is often hard to do when I am yelling and screaming at someone hoping to win them over with my volume and superior intellect.

And even when I am convinced of my right-ness, I struggle to respond with love. Instead, I become self-righteous and indignant.

But that feeling is short-lived. I kind of hate myself afterward.

And a relationship may be strained.

And nothing has changed.

And I am back to feeling overwhelmed by the dark. And waiting. And lacking. And anticipating.

And then I see a child staring into a candle. 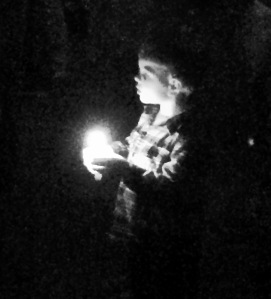 And then I see a group of people standing together, holding candles, and singing together.

And then I see conversations taking place between old friends and new.

And then I see people learning about opportunities to volunteer.

And I hear no angry rhetoric.

And I hear no one responding to or acting out of fear.

And the darkness does not seem as dark.

And the waiting does not seem as bad when there are others waiting with me.

And it does not appear that I am lacking as much as I thought I was.

And the anticipation does not leave me feeling as helpless.

And learn a lesson from Mary, mother of Jesus:

May that be my prayer through this Advent season and beyond.